Summary of meeting locations for the District 2 Annual Meeting

Summary of meeting locations for the MASITE Annual Meeting

The Mid-Colonial District (aka District 2) was initially chartered by the Institute of Transportation Engineers on January 1, 1973. The area designated for this District encompasses the states of Delaware, Maryland, the portion of the State of New Jersey south of the northern borders of Burlington and Ocean Counties, Pennsylvania, northern Virginia counties of Arlington, City of Alexandria, Fairfax, Loudoun and Prince WIlliam, West Virginia, and the District of Columbia. Two Sections have been chartered by the District: the Mid-Atlantic Section (MASITE) and the Washington DC Section (WDCSITE). 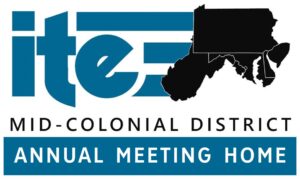